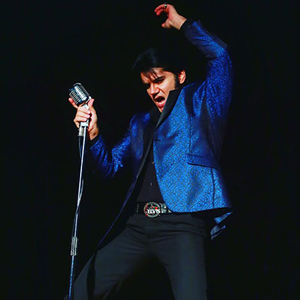 Festival’s 25th anniversary filled with thrilling events and Elvis Tribute Artists from around the globe.

The Collingwood Elvis Festival will celebrate in style for its 25th anniversary with Signature Events, the Classic Car Parade, and some exciting new international Elvis Tribute Artists, along with many returning fan favorites. From July 26 to 28, spend a weekend in Collingwood celebrating and reminiscing with fans, friends, and family. This is the Collingwood Elvis Festival ‘Homecoming,’ and you are welcome to release your inner Elvis! Limited tickets are available at www.collingwoodelvisfestival.com.

A Better Way to Experience Elvis Tribute Artists
Fans can now save 10 percent on the Signature Events with a new 3-pack general admission package for the Semi-Finals, Saturday Night Homecoming, and Sunday Grand Finals! It’s only $81.00 + taxes & fees, so get in on the savings!

The municipal special event permitting process requires that applicants meet all conditions put forward by the permitting signing authorities (Clerk, PRC Department, Fire Department, OPP, Public Works, and BIA for events proposed for the Downtown BIA district) and detailed at www.collingwood.ca. Applicants would also be responsible for securing a license through EPE. The Town looks forward to providing advice and corporate knowledge on past programming and operational best practices to the management successor in an effort to maintain the Festival’s quality standards and brand reputation.

About the Collingwood Elvis Festival
Over its 25-year history, the Collingwood Elvis Festival has attracted thousands of visitors from all over the world. The festival is a celebration of the life and times of Elvis Presley and his influence on various musical genres, the popular culture of his time, and an entire era of fans and artists who have carried lasting memories of his impact on the world. It has been recognized as the world’s largest annual gathering of Elvis Tribute Artists and a Top 100 festival by Festivals & Events Ontario. In addition to the three Signature Events, there are Elvis Tribute Artists performing at many associated venues as well as the two stages on Hurontario Street, which also features the Vendor Walk and ElvisYourselvis, an interactive station that measures how well a person mimics the moves of a of Elvis.