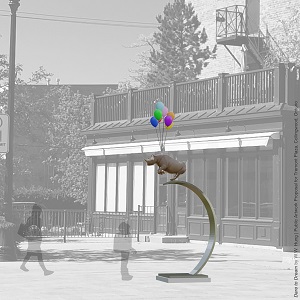 Collingwood, ON [November 1, 2021] –W.W. Hung has been selected to create the Tremont Plaza public artwork, a permanent, outdoor installation at Simcoe Street and Tremont Lane.

The artwork called “Dare to Dream,” features a bronze cast of a hand-sculpted rhinoceros perched on top of a seven and a half foot tall stainless steel arc. The rhinoceros is poised on its hind legs as if about to take flight with eight painted aluminum balloons attached to its back. The balloons are the colours of the original rainbow Pride flag of 1978.

“We are excited about William’s proposal,” says, Tanya Mazza coordinator of Arts & Culture for the Town. “This artwork will captivate viewers with its uniqueness and whimsicality and invite exploration and conversation about belonging, being oneself and making space for everyone in our community to do the same.”

In William’s proposal, the steel arc suggests a rainbow and the rhinoceros represents the LGBTQ2S+ community, a symbol first used in 1974.

After being one of four shortlisted candidates from 24 entries, William prepared a proposal including drawings, materials and budget which was presented to the Public Art Working Group. This ad hoc volunteer committee consisting of seven members of the community and two Town staff was assembled for the purposes of establishing the project criteria and selecting the artwork.

“The committee was instrumental in getting us to this point and we are grateful for the time and energy they invested in this project, added Mazza. “Now we can’t wait to see William’s proposal come to life.”
Funds for the project have been building in a reserve that was established in 2012 by Collingwood Council. The theme for the project was proposed by the Rainbow Club of South Georgian Bay and approved by Council in 2020. The total project budget is $50,000.

Dare to Dream is scheduled to be installed in Spring/Summer 2022.

About Collingwood
The Town of Collingwood is a progressive community located in the heart of a four-season recreation area on the southern shore of Georgian Bay. The area is well known for its many natural amenities and its rich heritage. Collingwood is a destination for tourism and many business, sporting and cultural events. Collingwood acts as a gateway to the South Georgian Bay region, with stunning landscapes that encourage an active lifestyle and inspire the local arts and culture community. Downtown Collingwood might just surprise you with 30 plus restaurants, 60 plus boutique shops, spas for relaxing, live music for grooving…all in the only downtown core recognized in Canada’s Registrar of Historic Places! More recently, the harbourfront area is emerging as an extension to the downtown district. Plans for expanding the amenities and events in the harbourfront area promise to make this a much more prominent tourism destination.