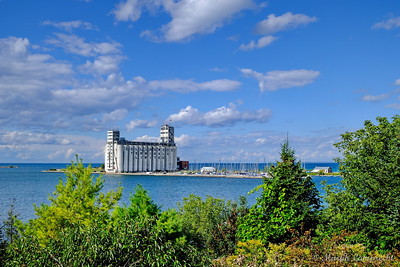 Following an extensive procurement process, Streetcar Developments Inc. & Dream Unlimited Corp. has been recommended as the successful proponent to be considered to move forward with their proposal to revitalize the Collingwood Grain Terminals.

The submitted proposal outlined a commitment to developing their vision within the guiding principles established by the Town along with an extensive community engagement process. Some of these principles include structural preservation of the terminals, optimized public access to the spit and to energize and animate Heritage Drive.

Following the closing of the RFP, Town staff completed a compliance review with the independent Fairness Monitor, followed by technical evaluation, and a closed session presentation with the evaluation committee which was observed by Council.

“The Collingwood Grain Terminals Revitalization Project is such a significant undertaking, likely one of the most impactful that Collingwood has seen since the Terminals were erected in 1929. Months of planning, reviews, public engagement, and evaluation to ensure the desires of the community are met for the Terminals’ future and the future of the Collingwood Waterfront,” says Sonya Skinner, Town of Collingwood Chief Administrative Officer.

“Our proposal enables public access to the Spit, the Bay and the Terminal Building itself in ways that would not have been previously possible. The Terminal building is not just being preserved, its being infused with new life becoming a cultural, recreational, and economic community asset and a beacon for sustainability for the Town of Collingwood,” states Les Mallins, president of Streetcar Developments Inc.

The proponent summarizes their proposal as follows:

The Collingwood Grain Terminals Revitalization Project presents a remarkable opportunity to demonstrate how a public-private partnership can create a dynamic, high-quality year-round destination that will thoughtfully re-adapt and honour Collingwood’s beloved landmark. Our proposal includes the following highlights:

Council will provide direction on next steps during the Council meeting to be held Thursday, August 18th. If Council awards the project to the recommended proponent, the bidder and staff will develop a Memorandum of Understanding outlining the various terms and conditions of the arrangement. The public consultation strategy developed by the proponent would commence shortly thereafter.

Learn more about the Collingwood Grain Terminals Revitalization and the processes taken to date: https://engage.collingwood.ca/collingwood-grain-terminals

For more information of the RFP process, see the latest staff report

Background
The Town of Collingwood is seeking a visionary partner and/or developer to revitalize this unique property that is home to the Collingwood Grain Terminals and the surrounding spit land on Heritage Drive. There is an opportunity to repurpose and reimagine the historical waterfront property. The Town is committed to respecting the local heritage of the Terminals by preserving the Terminals in some form, while also ensuring the surrounding land encourages public access to the waterfront for the people that live, work, and play here.
There has been extensive public engagement regarding the Collingwood Grain Terminals, such as through the Waterfront Master Plan, Terminals White Paper, and the Built Heritage Assessment. This engagement demonstrated there is a strong local connection between many current, former and some new residents to the preservation and revitalization of the Grain Terminals.

This unique opportunity awaits a partner and/or developer to share their vision to transform this landmark and surrounding lands to create a destination for residents and tourists. There is so much potential for bold concepts that energize and animate the site while respecting, celebrating, and preserving the historical significance of the Terminals.