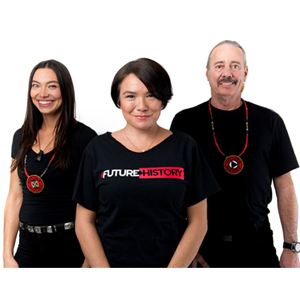 Coming to the Simcoe Street Theatre for the first time, INDIGENOUS 150+ is a film and conversation series dedicated to putting Indigenous voices centre stage. Now in its’ third season, Indigenous 150+ was started as a response to the Truth and Reconciliation Calls to Action. On Wednesday, November 27, starting at 7:00 PM, INDIGENOUS 150+ will screen two episodes from the acclaimed series FUTURE HISTORY, a television series that celebrates the reclamation of Indigenous knowledge and shines a light on individuals around Ontario and elsewhere who are shifting colonial narratives and leading the reclamation of Indigenous knowledge systems, language, and identity. Attending the event and participating in a post-screening conversation moderated by Jillian Morris will be the series co-creator, award-winning filmmaker Jennifer Podemski, and Jeff Monagaue. Mr. Monague who is an Ojibwe Elder, former Chief of Beausoliel First Nation and an Ojibwe language and knowledge carrier is featured in the series.

FUTURE HISTORY: Reclaiming Our Past, Harnessing Our Future is now in its second season and is a 13-part television series created for APTN by Jennifer Podemski and archeologist and artist, Kris Nahrgang.

INDIGENOUS 150+ will also be presenting a screening of CLUB NATIVE on December 4, 2019, at Owen Sound & North Grey Union Public Library with award-winning writer/director and creator of the celebrated television hit MOHAWK GIRLS.

For information about events: www.Indigenous150plus.com

Indigenous 150+ is honoured to be hosting these events in Saugeen Ojibway Nation Territory, home to Chippewas of Saugeen and Neyaashiinigmiing (Nawash), Métis, and many other nations. Thank you to all our supporters and partners.