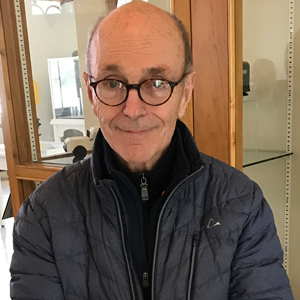 The Collingwood Museum is pleased to announce the newest installation in its Community Collector series.

The new exhibit will be paired with the Museum’s popular Community Collectors’ Night on Wednesday, February 26 at 7:00 PM. The event will feature a live carving demonstration by Garry and participants will have the opportunity to ask questions about his inspiration and process.

Museum staff encourage participants to bring a carving from their personal collections for a community show-and-tell. In the case of inclement weather, the event will take place on Wednesday, March 4.

Garry traces his passion for woodworking back to his childhood. He explains: “My collection was influenced by my mother’s brother, Uncle Bob Hilts. Sometime during the 1950s, he made a wooden model of my father’s 1949 REO truck as a Christmas present.” Hilts’ truck is featured in the centre of the new exhibit in honour of the inspirational role it played in Reid’s development as an artist.

In his retirement, Garry works out of his A-frame workshop where he turns bowls and pens, carves birds, and builds models of local business vehicles. He also makes doll cribs, truck piggybanks, and other items as gifts for his nieces and nephews.