Rivers and Streams in Our Town

Collingwood is a town blessed by stunning natural amenities. There are four major watercourses that flows through the town – Silver Creek, Black Ash Creek, Pretty River, and Batteaux River.  These rivers originate from the Niagara Escarpment and flows through Clearview Township before flowing into the Town of Collingwood. In addition to the major rivers, Collingwood also has several minor river systems which discharge directly into the bay such as Townline Creek, Cranberry Creek, Oak Street Canal, Walnut Street canal, Bower’s Beach Creek, and many other unnamed creeks.

Our rivers are also essential green infrastrucutre for containing rain and snowmelt, diluting sewage effluent, and they also offer flood protection to the urban areas of our town.

Pretty River and Black Ash Creek flow through the developed areas of town and are considered our urban streams.

Both Pretty River and Black Ash Creek act as flood control structures in Collingwood. They were designed to contain the floodwaters from the​ Provincial Regulatory Flood Event. For context, this type of event is very similar to Hurricane Sandy that happened in New York in October 2012.

With the increasing affects of climate change, the likelihood of these storms happening will increase.

Built in the 1970s, the Pretty River Dike is a raised embankment built to reduce the risk of flooding in the east end of Collingwood.

This 2 km flood control structure starts at the southwest intersection of Peel Street and Lynden Street, passing the old CN Rail bridge (now the Siding Trail), then Hume Street and the Pretty River Parkway before ending at Oliver Crescent near the shore of Nottawasaga Bay.

Historically, Black Ash Creek flooded each spring, causing extensive shallow flooding in the western part of Collingwood. Beginning in 2003, the creek was modified to create a 3.7 km floodway designed to contain storm flows, allow for more development, and protect surrounding properties. The floodway mimics a natural river environment, where deeper sections of the river provides good habitat for fish and wildlife, and the wider sections of the river can allow more water to flow through during floods.

To improve fish habitat, tree seedlings, gravel bottom areas, deep pools and a meandering channel were installed in the floodway. In addition, a new 500 m stream channel was constructed as part of the Petun Branch of Black Ask Creek in order to extend the good quality trout habitat provided by this tributary.

Every five years, the Nottawasaga Valley Conservation Authority (NVCA) produces a Watershed Health Check that provides an overview of the state of the forests, wetlands, streams and groundwater health for the town. 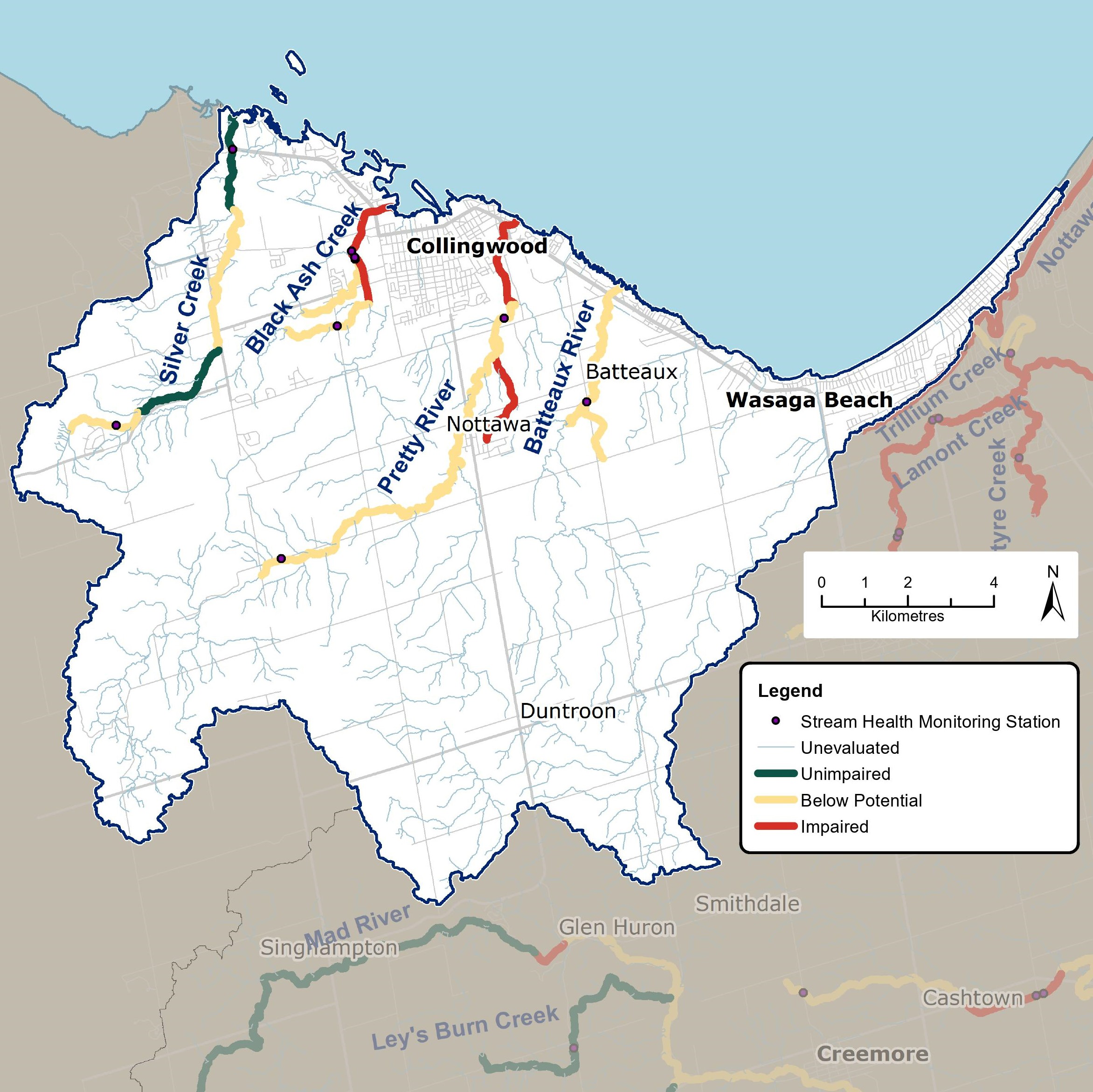 The results from the 2018 Watershed Health Checks of Collingwood's urban rivers are as follows:

Stream health in the Pretty River, through the Niagara Escarpment is close to its natural unimpaired condition, but shows signs of disturbance due to human impacts as it flows through Clearview Township. The river is impaired as it enters Collingwood. Impaired stream health continues through the constructed flood control channel in urban Collingwood to Georgian Bay.

Black Ash Creek also begins in the Niagara Escarpment but the combination of a large man-made pond, a fish hatchery, and receives less clean, cold groundwater from the Escarpment, resulting in only short stretches of truly unimpaired water quality. Below the Escarpment, the creek is also impacted by human activities before it enters Collingwood as an impaired system. This condition continues as it flows through the town and into the Collingwood harbour.

In 2021, the man-made pond was removed and Black Ash Creek was restored to its original condition. As a result, NVCA expects to see improvements in water quality.

What are we doing about it?

Currently, we know that elevated levels of oils, salts and sediments from the intensive commercial developments in Collingwood are having a negative impact on the downstream sections of Black Ash Creek. However, the information and data in the Watershed Health Checks can only provide preliminary information about the rivers and streams in the Collingwood.

The town has tasked NVCA to further investigate why Pretty River and Black Ash Creek are impaired, and what can be done to improve their situations.

Support for these initiatives comes through the Town’s Community Based Strategic Plan (2020-2023), under “Goal: enhance community well-being and sustainability”. Included under this goal, is the objective to “preserve the town’s environment and take action on climate change”, which identifies that the Town should work to “baseline and improve Town’s environmental performance measures” within one (1) to three (3) years. Ongoing stream health monitoring has already begun with the objective of identifying ways which the Town can begin to improve our natural environment.

Project Timeline and Next Steps

From 2022 – 2026, NVCA will be on the ground  sampling water chemistry, aquatic insects, and fish to refine our knowledge about the health and what’s impacting Pretty River and Black Ash Creek.

By collecting water samples, NVCA can analyzes the chemical composition of the rivers and streams to provide a snapshot of stream health conditions and to allow us to identify why these rivers are impaired. Through water chemistry monitoring, we can track the water temperature, oxygen levels, nutrient, and metal concentrations in the rivers.

Aquatic insects, scientifically known as benthic macroinvertebrates (BMI) are small animals that can be seen with the naked eye and have no backbone. These animals include worms, snails, mussels, leeches, crayfish as well as the immature life stages of insects that​​ live among the stones, logs, sediments and aquatic plants on the 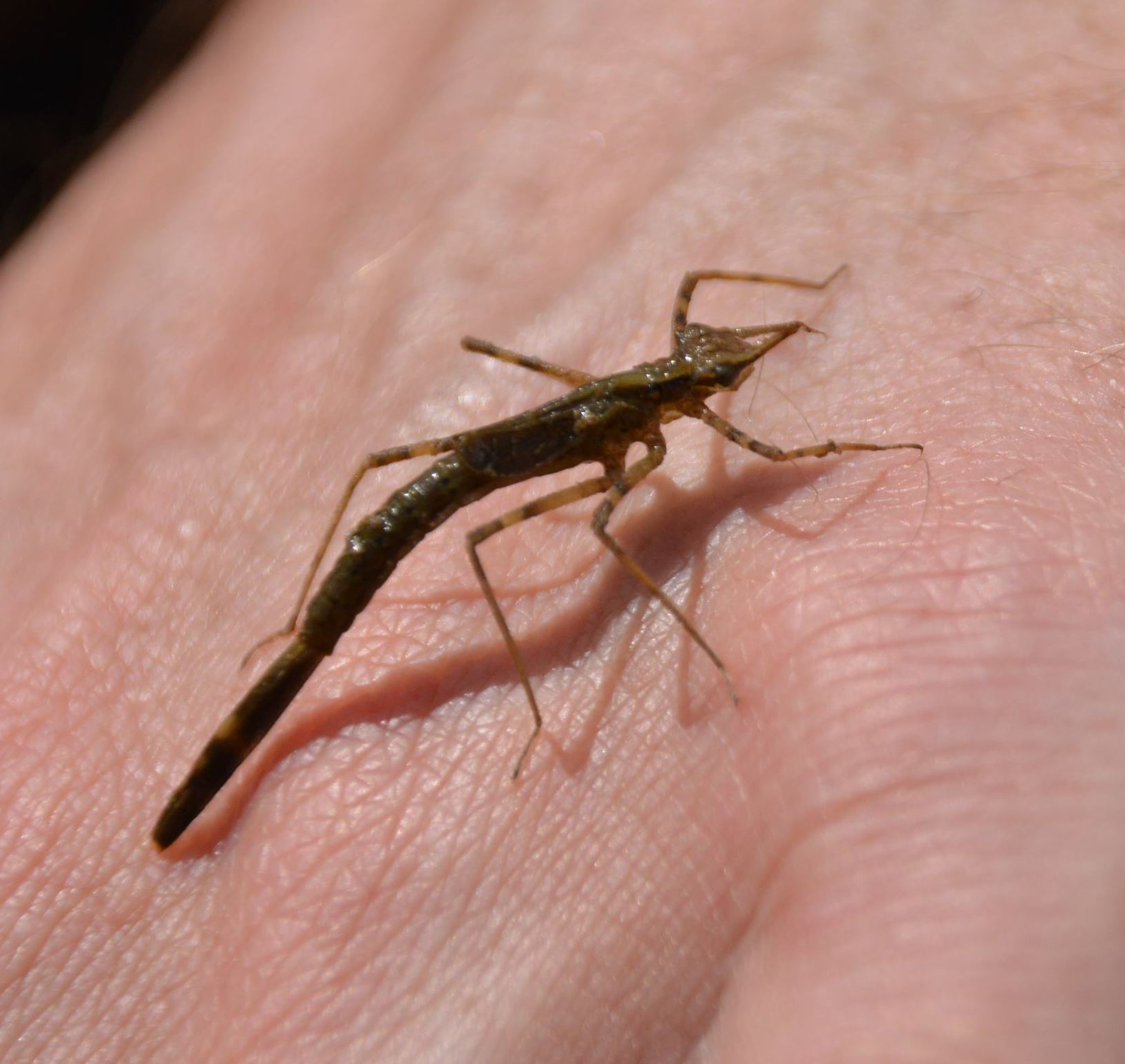 bottom of streams, rivers and lakes.

BMI can live in streams for up to three years. During this time, they are exposed to the full range of water quality conditions in the stream. By monitoring them, NVCA can evaluate stream health over time.

Some species require excellent water quality to survive while others are quite tolerant of pollution. By looking at the different species at a site, we can identify whether stream health has been good, fair or poor over their lifespan. Since BMI are at the bottom of the food chain, their community responds quickly to changes in stream health conditions.​

Monitoring the amount and types of fish in our watershed lets the NVCA understand the human impacts on our streams and rivers. Some threats include dam construction, changing water temperatures, overfishing, the introduction of invasive species and pollution.

Watershed science staff samples for fish using a standard protocol called electrofishing. Fish of all sizes are collected from the smallest minnows to the largest game fish. Fish are then separated by species, counted, measured, and weighed before being released back into the stream. When done correctly by trained staff, no fish are  harmed during the sampling process. Depending on the size of the stream other methods may be employed.

For any additional questions on the project, please contact: